Praying Mantises: The Truth About Eating Their Mates

Do female praying mantises really eat their partner while mating? This is one of the most fascinating claims in the often bizarre world of insects.

It goes like this: During mating, the female praying mantis starts to eat her partner, beginning at the head and working her way down. Losing his head does not stop the male as reflexes allow him to finish his life purpose before the rest of his body is consumed.

However, the truth is that female praying mantises, in a natural environment, rarely seem to cannibalize their mates.

The behavior was first reported by observers of captive specimens, but more recent field research has produced little evidence of this fascinating act. Confining the mantids may have reduced the males’ ability to mate safely.

Safe sex is chancy, even for males in the wild, with their reproductive instinct forcing them into the closest of contacts with a still more deadly predator than themselves. Their potential mates are larger and stronger; anything that moves and can be subdued is considered food.

Male spiders face a similar threat. To convince females that they are an attractive partner rather than an attractive lunch, male spiders use an arsenal of elaborate courtship rituals, such as plucking their mate’s web in a precise rhythm, signaling with their pedipalps or bribing their partner with a food morsel.

The strategy of the male mantid is much simpler. Although some entrance their mates by waving colorful forelegs, it appears that the males of most mantid species rely on stealth. A male approaches a female from behind and quickly jumps on her back, tucking his head behind hers to avoid the range of her deadly grasping forelegs. After mating, he beats a hasty and respectful retreat. 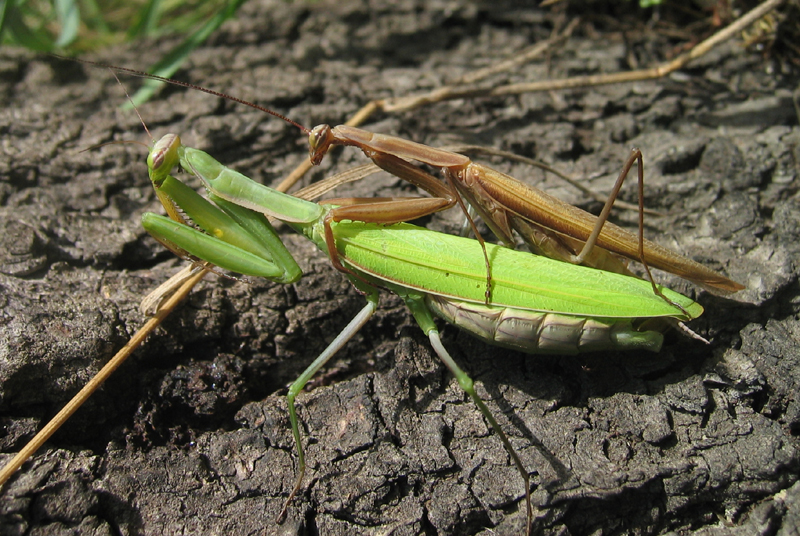 Mantids have been called the sharks of the insect world and are indeed efficient hunters, stalking and ambushing insect prey to satisfy voracious appetites. They are cannibals at all stages of their development, ready and willing to eat each other from soon after hatching in late spring until mating season, just before their deaths in early autumn. 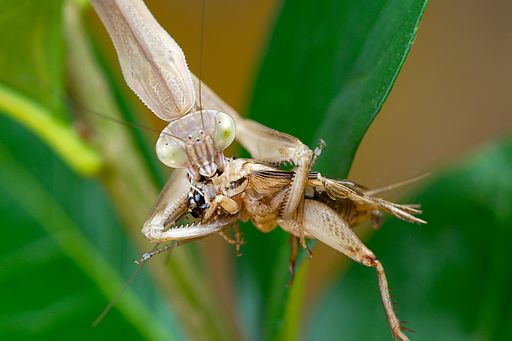 Despite their deadliness to most insects, mantids are harmless to humans. Still, holding one in the palm of a hand can be an eerie experience. Mantids are the only insects in the world that can look over their shoulder, thanks to a flexible neck. So a mantid can rapidly fix its huge eyes on anything it wants, often the observer’s face. This ability leaves one wondering who’s watching whom, and feeling profoundly thankful for an overwhelming size advantage.

The praying mantis (or European mantid) is Ontario’s most common mantid species. It was accidentally introduced to the Rochester, N.Y., area in 1899. The immigrants probably hatched from egg cases that their mother laid on a shipping crate in Europe. These efficient insect control officers have since spread throughout southern Ontario. Our only other species was also introduced (the Oriental mantid) and is the world’s largest. It is restricted to the extreme southern part of Ontario.