There are 15 species of hummingbirds living north of Mexico but only the Ruby-throated Hummingbird can be seen in Lambton County.

Only three to three-and-half inches long and weighing about as much as a penny, they can flap their wings more than 50 times per second, producing a humming sound. They can fly forwards, backwards or straight up or down and can hover to feed from flowers. They accomplish all this by tilting their wings in much the same way as helicopter rotor blades are tilted to change direction.

In earlier times, people did not believe that a bird as small and fragile could migrate thousands of miles from its breeding ground to its winter range in Florida, Mexico and Central America. This gave rise to the legend that the tiny birds traveled as passengers on the backs of bigger birds, such as the Canada goose.

Now we know better. Ruby throats fly south in the fall and north in the spring. Observers have seen spectacular flights of these tiny mites flashing by overhead in great numbers at such places as Point Pelee and Port Stanley. Banded birds have been found to return to the same area the next spring.

Although most hummers follow a land route over Mexico to their winter homes in Central America, it has been established that many fly directly across the Gulf of Mexico, a distance of more than 800 kilometres.

We can see ruby throats in most parts of Ontario. They prefer to live in wooded areas, wetlands and even landscaped parks and yards where they can find small insects and nectar-producing flowers.

It is believed that ruby throats’ range may be tied to the presence of yellow bellied sapsuckers whose drilled holes in tree trunks provide a source of sap and the tiny insects attracted to the sap. 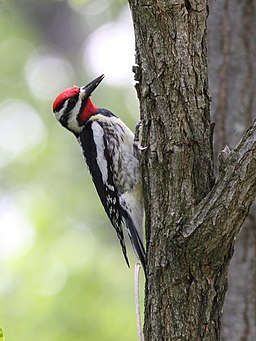 Once or twice a year, the female lays two pea-sized eggs in a tiny lichen-covered, plant down-lined nest which is saddled on a tree branch two to 15 metres from the ground.

Depending on where you live relative to wooded areas, you may be able to attract hummingbirds into your yard by planting nectar-producing flowers such as morning glories, cardinal flowers, petunias, trumpetvine, Bristol ruby weigela or bergamonts. They are also attracted by putting up a brightly colored hummingbird feeder filled with sugar water (one part sugar to four parts water).

For more information on this topic, or any other nature-related subject, contact us.