Take a Walk on the Wild Side

Lambton Wildlife’s 25-acre Mandaumin Woods is waiting for you. It is located 14.5 kilometres east of Sarnia on Mandaumin Sideroad, 1.6 kilometres south of Confederation Street on the west side of the road – (It’s the square piece of forest on the left side of Mandaumin Road in the Google Map below).

The woodlot is a wonderful place to take a quiet walk, birdwatch, or botanize. Over 44 species of birds have been seen in or from the woodlot, from the lowly starling to the beautiful scarlet tanager. The greatest numbers are usually seen during the spring migration. As well, almost a dozen species have nested on the property, enabling the visitor to see several species throughout the summer.

For those interested in mushrooms and fungi, 87 species have been identified to date. Varieties of fungi can be found regardless of the season of your visit.

In spring, look for scarlet cups. Cup-shaped, with a scarlet interior and a fuzzy white exterior, they grow to two inches on wet decaying wood. Similar to the scarlet cups, but taller, are devil’s urns. Elongated in shape and one inch in diameter, this species is all black. 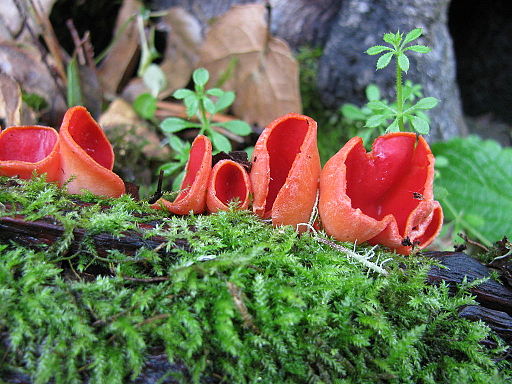 Turkey tails are among the easiest fungi to find. Mandaumin woods is home to three species. Ranging two to 24 inches in diameter, they look like fanned out turkey tails and are found year round on decaying wood.

For the botany buff, well over 90 species of plants can be seen. They range from the 100-foot tall sugar maple to a three-inch Hepatica which has off white to mauve flowers in the spring. Now that April is upon us, you are sure to see several species in bloom or fruiting until the late fall.

So, jump up out of your chair, grab your coat and rubber boots, and head out to Mandaumin Woods. Walk along the marked trail or do some natural history exploring. When you go, have fun, take pictures and leave only footprints.